Eyes narrowing, Torin took a step closer. “This isn’t about an alliance at all, is it?”

“Oh, I fully intend to form an alliance with Luna.” Kai glanced at the cyborg foot again. “I just intend to put a different queen on the throne first.”

WARNING: THERE ARE SPOILERS IN THIS REVIEW 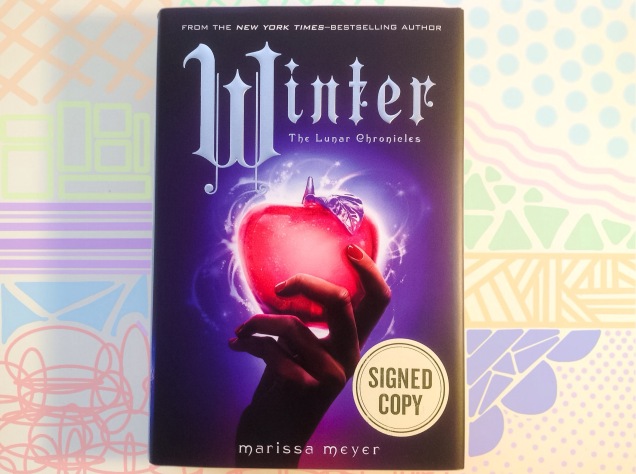 Ahh!! The Lunar Chronicles has come to an end. It was wonderful, but I WANT MORE!! This book made me feel all the contridicting feelings at once. I don’t know how she does it, but Marissa Meyer is the emotion pupper master.

Anyway, Winter by Marissa Meyer is the fourth and last installment in the Lunar Chronicles. If you haven’t read any of the four books in this series, I would suggest you go read them before you read this review.

If you already have read the series, let’s move on!

This book is basically the retelling of Snow White. There are some parts of this book where you can definitely see the resemblance of the two stories. (Like when Levana orders Jacin to kill Winter, and Jacin doesn’t and instead helps Winter escape the castle)

Can we just talk about the sheer size of this story? 800+ pages. 800+ PAGES!!! The book itself is normal sized because the paper is super thin. I don’t know about you, but I love big books. When I saw Winter at the bookstore, I was kind of disappointed.

Moving onto the story…

I love all the characters. Except for Levana and Aimery. They’re just (insert choice of words here). When I read Fairest, I felt sympathy for Levana because what she had gone through in her childhood. And this book ruined that. I no longer felt any sympathy for Levana after how crazy she turned out to be. You think Princess Winter is the craziest? No, Levana is on a whole new level.

Speaking of Winter, I felt kind of uncomfortable when she started having her moments. Was I the only one? I don’t know what to feel about Winter. She was obviously on the side with Cinder *ahem* Princess Selene, but something about her made me hesitant to like her. Even now, I’m unsure what to think.

My favorite characters were Iko and Captain Thorne. They both kept the team together when things got a little out-of-orbit (too cheesy?). I also liked Kinney, even though he didn’t make as big as an appearance as some other characters in the book.

When Levana and Selene (I’m still not used to her being called that) had that face off as they were trying to kill each other, I was actually terrified that Levana was going to win. There were many times when Levana became rather close to winning the war.

Gosh this was fantastic. 10 out of 10, would recommend. This has been one of the most satisfying (and unsatisfactory) endings ever. The way that Marissa Meyer ended the book was on point, but I STILL WANT MORE!!

And if you want more too, there are some novellas hanging around out there somewhere that are going to be compiled into a book called Stars Above (March 2, 2016). I’m so excited!!

… the sight before her was proof that her revolution had begun. (Meyer 324)