“Do the clouds ever clear?” she asked.
“Completely? No. Never.”
“What about the Aether? Does that ever go away?”
“Never, Mole. The Aether never leaves.”
She looked up. “A world of nevers under a never sky.” 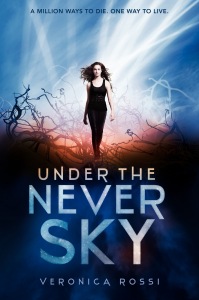 ATTENTION: This review is spoiler free

This book was like many of the dystopian novels I’ve read before. There’s the little population that live underground/away from the wilderness with high technology, and there’s the people who live on the outside (a.k.a. the savages). The girl somehow finds her way to the outsiders and a guy from the outside needs her to take him into the place she lives.  The girl agrees after some inner conflict and they fall in love along the journey.

There wasn’t anything bad about the book, but nothing stood out to me.  It’s your average dystopian book.

One thing I found very awkward was when Peregrine and Aria are in a dangerous situation but they can’t help but stare at each other because they think that the other person is goregous. Get a room, lovebirds (after you escape the cannibals, of course)!

There isn’t much originality to the basic plot of the story. Then again, I can say that with a lot of young-adult books nowadays.

However, the world and characters were different from anything I’ve read about.

I found in many books with the girl from high technology and boy from nature situation, the girl whines/complains/becomes a Debby Downer when she steps foot into the wilderness. Aria, however, doesn’t do that. She doesn’t complain (much) and tries to learn how to survive in the wilderness alone. That itself deserves a round of applause. She doesn’t rely too much on Peregrine to protect her when danger comes their way, and pushes past her pain the achieve her goals. And then there were the powers that some of the “savages” were born with. Some had exceptional hearing, and could read minds. Others could smell what others were feeling.

Within the fantasy/sci-fi world, I have never seen a contact-like device that goes on the eyeball and let’s you go to virtual worlds. I thought that was a fascinating concept.

Plus, the cannibals. As gross as it is, it brings a whole new element to the story.

I can’t imagine being chased by cannibals *shudder*

I give this book 3.5 / 5 BBC Sherlock character heads. It was sort of slow, but picked up in the end.

One thought on “Under the Never Sky”