IT’S A FREAKING HARRY POTTER BOOK TAG MY LIFE IS COMPLETE OH MY GOODNESS I LOVE HARRY POTTER IT’S MY LIFE AND CHILDHOOD! Seriously, guys. I love Harry Potter. It’s my childhood. I grew up with him. Like, I’m kind of major fangirling over here. The  Harry Potter series is what got me into reading. Anyway, I was tagged by Ariana @ The Quirky Book Nerd.

It’s been almost a month since I was tagged to do this and I’m finally posting this.

The only rule for this tag is that you can’t use Harry Potter as an answer.

A book where you found the theme interesting, but you’d like to rewrite it.

The concept of The Maze Runner by James Dashner was super interesting, but I didn’t enjoy the writing. It was… I don’t know… childish, in a way. It’s hard to explain, but in general, the whole writing style was childish. Also, some parts of the story could’ve been upgraded. Seriously, why are the mechanical slug things (which I later remember is called a Griever) slugs? Why weren’t they wolves or something a little more dangerous? Although giant slugs are a bit terrifying, I still think wolves or maybe even elephants would be more effective.

The first book in a series that got you hooked.

I randomly picked up Throne of Glass by Sarah J. Maas one day in the ebook store and I couldn’t put it down. I was up until 4 o’clock in the morning reading it before I only had a couple chapters left but I went to sleep because I was tired as heck. I love everything about the book. The characters, the worlds, the plot, the competition, everything. No words can describe how much I love this series.

A book you wish you could have right now. 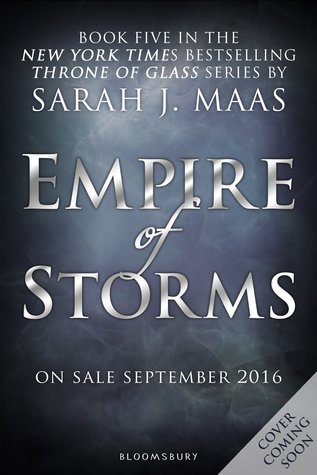 I would love to have Empire of Storms, the fifth book of the Throne of Glass series by Sarah J. Maas. I CAN’T WAIT FOR IT TO COME OUT. I NEED TO KNOW WHAT HAPPENS NEXT. If you haven’t read Throne of Glass before, you’re missing out big time. It’s amazing.

A killer book. Both senses. Take it as you like.

A killer book (in a good sense): Lady Midnight by Cassandra Clare

I don’t know how Cassandra Clare did it, but this book is even better than The Mortal Instruments series. The ending metaphorically killed me. It’s killing me to wait for the next book. Plus, the Shadowhunters are trying to find a killer in this book. This book is seriously killer. 🙂

A killer book (in a bad sense): Half Bad by Sally Green

It says it all in the title. This book is half bad. It was painful to finish. I have no idea how I finished it. It’s boring as heck. The only parts that were remotely exciting was the beginning and the end.

A book that you found really confusing.

The Well of Ascension by Brandon Sanderson was super confusing, but in a really good way. The story is complex, and there are so many twists and turns in it that at times I had to stop and process what had happened. And that ending. THAT ENDING! It was just… Amazingly confusing.

I just finished Carry On by Rainbow Rowell and goddamnit it was so CUTE. It’s just… GAH THE FEELS!

I don’t tend to read anything that’s remotely creepy/scary, but The Cellar by Natasha Preston was a bit creepier than expected. I didn’t expect ano rape, so I was stunned when it happened. There was no details about it, other than the fact that it happened. Some parts of the book is kind of cliché (like kidnapping in a white van and keeping people in a basement), but the thought it still frightening.

This man, Colin, wants to build a “family” by stealing girls off the street that he deems fit for each role. He changes their names to a certain flower, and if one girl dies, Colin goes out to find a replacement. Granted, he doesn’t starve the girls, but he locks them up in the basement and never allows them to come out.

Yeah. Not a psychopath at all.

A book that surprised you in a great way, reveals to be more than it is.

I didn’t expect much when I started Cinder by Marissa Meyer. I thought it was just going to be your average retelling of Cinderella. BOY WAS I WRONG! There are little elements of the original fariy tale incorporated, but it’s a whole new story. I thought it was going to be cheesy, but from the world to the gang of characters, it’s so much more.

and you! If you want to do this tag, consider yourself tagged!

10 thoughts on “The Harry Potter Tag”