(All the synopses in this point are taken directly from Goodreads.)

(There are some spoilers as some of these books are part of a series. I put spoiler warnings before their synopses and provided a drop down so the summaries are hidden unless you click on the drop down.)

The release dates are subject to change. These were the dates given when I was writing this post.

Before he was Batman, he was Bruce Wayne. A reckless boy willing to break the rules for a girl who may be his worst enemy.

The Nightwalkers are terrorizing Gotham City, and Bruce Wayne is next on their list.

One by one, the city’s elites are being executed as their mansions’ security systems turn against them, trapping them like prey. Meanwhile, Bruce is turning eighteen and about to inherit his family’s fortune, not to mention the keys to Wayne Enterprises and all the tech gadgetry his heart could ever desire. But after a run-in with the police, he’s forced to do community service at Arkham Asylum, the infamous prison that holds the city’s most brutal criminals.

Madeleine Wallace is a brilliant killer . . . and Bruce’s only hope.

In Arkham, Bruce meets Madeleine, a brilliant girl with ties to the Nightwalkers. What is she hiding? And why will she speak only to Bruce? Madeleine is the mystery Bruce must unravel. But is he getting her to divulge her secrets, or is he feeding her the information she needs to bring Gotham City to its knees? Bruce will walk the dark line between trust and betrayal as the Nightwalkers circle closer. 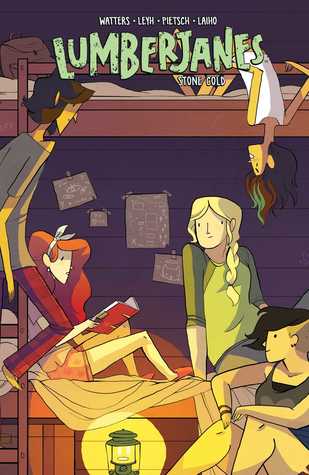 Five best friends at summer camp take friendship to the max when they team up to defeat the strange forces lurking within the surrounding forest.

Excited to have Barney starting their first week at the camp, the Roanokes run over to the Zodiac cabin, only to find everyone turned to stone! Between strange shadows and Diane being back, it looks like April, Jo, Mal, Molly, and Ripley are going to have their hands full trying to find a cure for their friends . . . as long as they don’t look the wrong thing in the eye first.

“…author Sarah Andersen uses hilarious (and adorable) comics to illustrate the very specific growing pains that occur on your way to becoming a mature, put-together grownup. Andersen’s spot-on illustrations also show how to navigate this newfound adulthood once you arrive, since maturity is equally as hard to maintain as it is to find… ”
—The Huffington Post

Sarah valiantly struggles with waking up in the morning, being productive, and dealing with social situations. Sarah’s Scribbles is the comic strip that follows her life, finding humor in living as an adulting introvert that is at times weird, awkward, and embarrassing.

A Court of Frost and Starlight (A Court of Thorns and Roses, #4) by Sarah J. Maas – May

When the Bat’s away, the Cat will play. It’s time to see how many lives this cat really has….

Two years after escaping Gotham City’s slums, Selina Kyle returns as the mysterious and wealthy Holly Vanderhees. She quickly discovers that with Batman off on a vital mission, Batwing is left to hold back the tide of notorious criminals. Gotham City is ripe for the taking.

Meanwhile, Luke Fox wants to prove he has what it takes to help people in his role as Batwing. He targets a new thief on the prowl who seems cleverer than most. She has teamed up with Poison Ivy and Harley Quinn, and together they are wreaking havoc. This Catwoman may be Batwing’s undoing.

In this third DC Icons book–following Leigh Bardugo’s Wonder Woman: Warbringer and Marie Lu’s Batman: Nightwalker–Selina is playing a desperate game of cat and mouse, forming unexpected friendships and entangling herself with Batwing by night and her devilishly handsome neighbor Luke Fox by day. But with a dangerous threat from the past on her tail, will she be able to pull off the heist that’s closest to her heart?

(no blurb or cover)

Queen of Air and Darkness (The Dark Artifices, #3) by Cassandra Clare – December 4

What are some of your most anticipated releases for 2018?

Do you have any New Year’s resolutions?

What is the best thing that happened to you in 2017?