When a tragic accident takes the life of 17-year-old Raven Roth’s foster mom–and Raven’s memory–she moves to New Orleans to recover and finish her senior year of high school.

Starting over isn’t easy. Raven remembers everyday stuff like how to solve math equations and make pasta, but she can’t remember her favorite song or who she was before the accident. And when impossible things start happening, Raven begins to think it might even be better not to know who she was before.

But as she grows closer to her new friends, her foster sister, Max, and Tommy Torres, a guy who accepts her for who she is now, Raven has to decide if she’s ready to face what’s buried in the past…and the darkness building inside her.

From #1 New York Times bestselling author Kami Garcia and first-time graphic novel artist Gabriel Picolo comes this riveting tale of finding the strength to face who you are and learning to trust others–and yourself.

I never really grew up with a TV because my family didn’t have cable when I was growing up (it’s part of the reason I love reading so much now because there was nothing else to do around the house). That being said, I didn’t watch Teen Titans whenever it came out on TV unless I was at a friend’s house and it happened to be airing. I do know a tad bit about the series and its characters through the internet, but nothing extensive. Basically, I was going into this Teen Titan novel blind.

^^ All the Teen Titans fans judging me right now

You honestly don’t have to know anything about Raven to read and enjoy this graphic novel because it covers her backstory before she joined her gang. I’m sure it’s much more special for those who grew up with the series, but I still loved the story and the artwork (more on that later).

As for the story itself, I think it was the perfect blend of mystery, teen angst, and high school romance. Raven lost her memory in a car crash, and she keeps on having these reoccurring nightmares ever since. She’s not sure whether or not she wants to know about her past because of these nightmares, and the reader can’t help wonder the same thing. You wonder, why is she having these vivid nightmares? They’re clearly not just dreams, but if they aren’t, then what are they and why are they happening?

The length of the novel was pretty good as well. Sometimes, I find that graphic novels can either be too short or drag on forever. At less than 200 pages, you’ll fly through the story but not too fast.

My one complaint is that there isn’t a second book to Raven’s story (from what I know). I know that Kami Garcia and Picolo are working on the story for Beast Boy, and I’m pretty sure their paths don’t cross in the story. I could be wrong, though. I really want to know what happens to Raven and how she defeats her demons (among other things), but if this book is the only book that’s going to be released on Raven, I wouldn’t be too unsatisfied.

The ending was good, but it left some questions in my mind that I want answers for. I think the author purposefully made the ending slightly vague as though Raven’s adventure hasn’t ended, because technically it hasn’t. Since this graphic novel is the “backstory” of Raven, it makes sense that Garcia makes the ending open-ended. I think she did it to connect the already-existing stories of Raven to her backstory.

I’ve followed the illustrator (Gabriel Picolo / @_picolo on Instagram) for quite some time now through my Tumblr years and now on Instagram. I’ve been a huge fan of his work for a really long time, and when I saw that he was working for DC to bring a series of graphic novels, I honestly squealed out loud.

Because of my book-buying ban, I couldn’t buy the book until the very last minute but eventually I pre-ordered it. When it finally came in the mail, I did a happy jig because I was so happy to finally have it in my hands.

I know I’m being biased because I admire Picolo, but the artwork in this graphic novel is fantastic. There’s something about his cartoon-ish style that I find so appealing to look at. Also, I love the way he styled Raven. Most of the time, you see are hidden in her cloak, her face half obscured by the shadows. I think Picolo did an awesome job of giving teenage-Raven civilian clothes while not diverging from her aesthetic.

I also love how the all the artwork is shaded. Most of it in sort-of grayscale except for Raven. The overall color-scheme seems to be purple (as it’s Raven’s color), which I can appreciate. By scaling down on the shading on the other pictures and only shading certain characters or objects in different scenes, Picolo helps the reader focus on what or who is important in that scene. 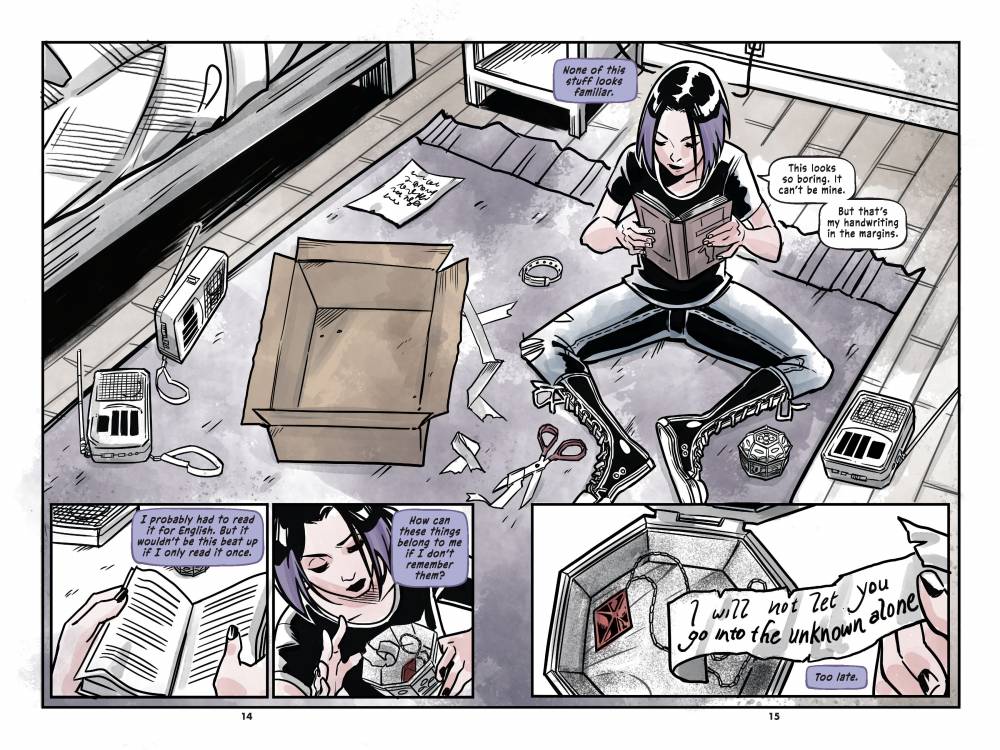 I mean, look at this artwork! It’s pretty fantastic.

I give this book 4 / 5 unicorn horns! Even if you don’t know much about Teen Titans, this story is still immensely enjoyable.