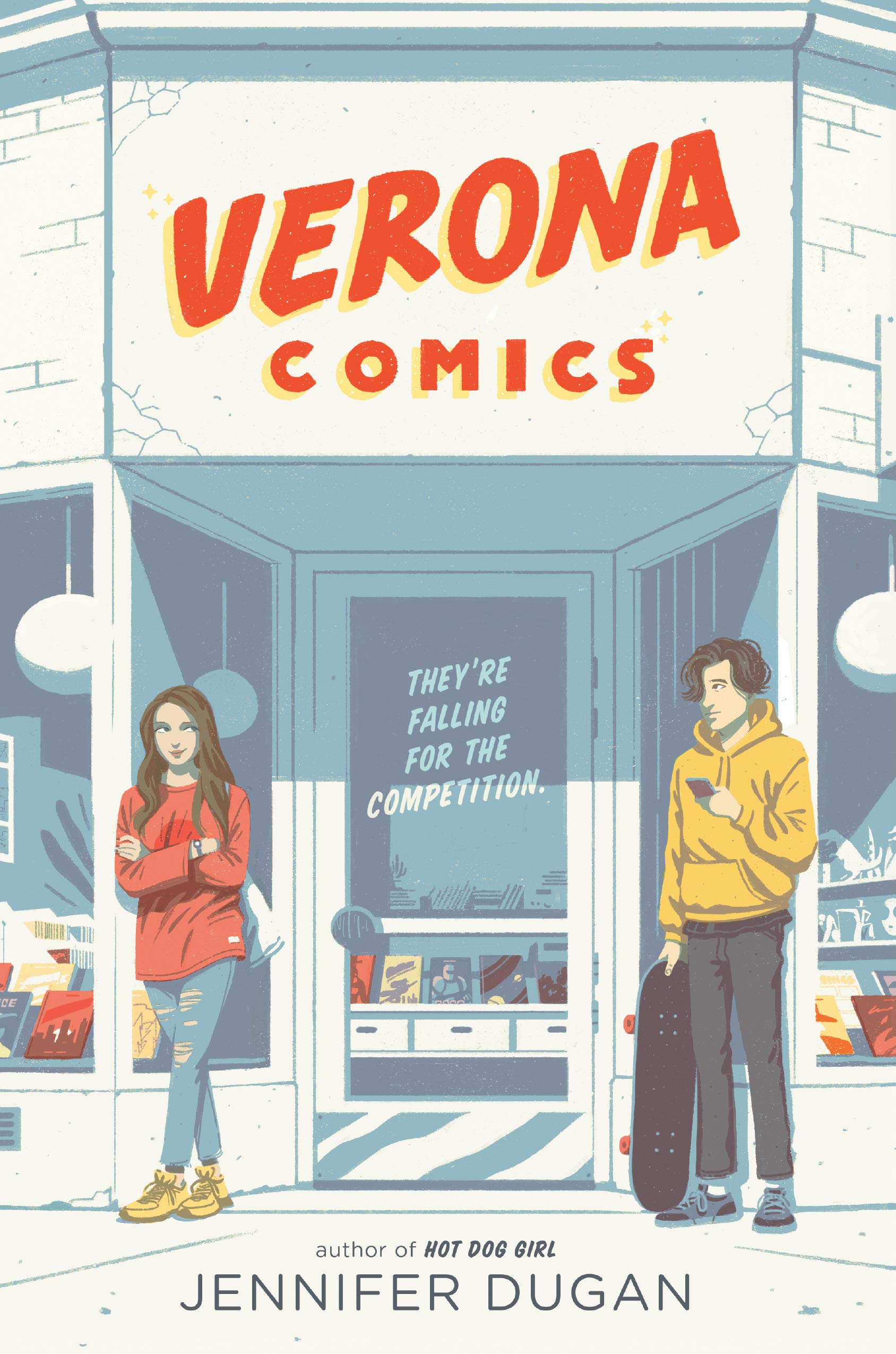 Jubilee has it all together. She’s an elite cellist, and when she’s not working in her stepmom’s indie comic shop, she’s prepping for the biggest audition of her life.

Ridley is barely holding it together. His parents own the biggest comic-store chain in the country, and Ridley can’t stop disappointing them—that is, when they’re even paying attention.

They meet one fateful night at a comic convention prom, and the two can’t help falling for each other. Too bad their parents are at each other’s throats every chance they get, making a relationship between them nearly impossible…unless they manage to keep it a secret.

Then again, the feud between their families may be the least of their problems. As Ridley’s anxiety spirals, Jubilee tries to help but finds her focus torn between her fast-approaching audition and their intensifying relationship. What if love can’t conquer all? What if each of them needs more than the other can give?

I was able to snag an ARC copy of Verona Comics at the North Texas Teen Book Festival this year, and I didn’t realize how much I needed this book until now. All of the thoughts in this review are my own.

I’m not much of a contemporary reader. They don’t interest me like fantasy/sci-fi books do. However, I’m really glad I was able to get a copy of Verona Comics. I probably wouldn’t have read this book otherwise, and that would be a crying shame.

One thing that I really liked about it was how easy it was to read. The chapters are super short, and they switch perspectives between the two protagonists (Jubilee and Ridley). Because of that, the story never feels like it was dragging. Once again, as someone who doesn’t read contemporary that often, it was nice that it didn’t feel like I was trudging through the story. It was hard to get bored, despite my genre preferences.

The story gives me a sort of contemporary Romeo and Juliet vibe. The two families have major beef with each other but fate has it that the two kids fall in love. They want to stay together, but they’re afraid that the feud between their parents will force them to break apart.

[ Author’s note: As I am writing this, I just realized that the two main characters have the same first letter of their first name as their counterparts in the Shakespeare play. Ridley is Romeo and Jubilee is Juliet. Welp. That confirms my suspicion that this is a modern take on Romeo & Juliet. ]

I think this book has probably the most diverse cast of characters that I’ve come across in YA literature. There is a range of races, ethnicities, and sexual orientations. I’m not saying that the cast is diverse (it’s not, in my opinion), but I am saying that it’s more diverse than what I’m used to in the young adult genre. It’s a step in the right direction. I also like how neither of the main characters are heterosexual. Ridley identifies as bisexual while Jubilee isn’t sure she’s ready to put a label on her sexuality. That is also something I don’t see often in YA books. There are a lot of people who don’t want/need/know how to define their sexuality, and that’s completely okay. To see that represented in a book is pretty awesome.

I think one of the reasons I really liked this book is how much I could relate to both Jubilee and Ridley. I used to play the cello, and I’m a perfectionist. Seeing Jubilee dedicate so much time and obsess over her audition brought me back to the time when I used to be the same way. Also props to the author for knowing what All State is. It’s kind of a big deal in high school (you’re competing with everyone in the state), and only the best of the best make it. While I was good enough to make All Region, I never made it to the All State level. But I digress. I relate to Ridley a lot as well. I understand his pains as I go/have gone through similar things. I’ve told myself the same thoughts he has running through his mind often. It was sort of eerie to see a character so different yet so similar to me in a story. It was as if the author took the essences that is me and put it on paper. Jennifer Dugan did a good job of portraying what anxiety and depression can look like. There are resources at the end of the ARC (and I’m assuming it’ll also be in the published copies) for those who are seeking help or knows someone who is struggling. I thought it would be a good idea to also post them here:

Overall, it’s a super sweet story that gives you a wholesome feeling while also tackling some pretty heavy topics like anxiety, depression, and defining what makes a healthy relationship. I recommend that everyone gives this book a shot because I think everybody would enjoy it regardless of the genres everyone prefers.

Despite the challenges she faces, I admire that she does so with a smile on her face and a good attitude.

I just want to hug the dude. He’s been through a lot and then some.

I give Verona Comics by Jennifer Dugan 4 / 5 unicorn horns. I highly recommend you read this book because it will be well worth your time. I promise.