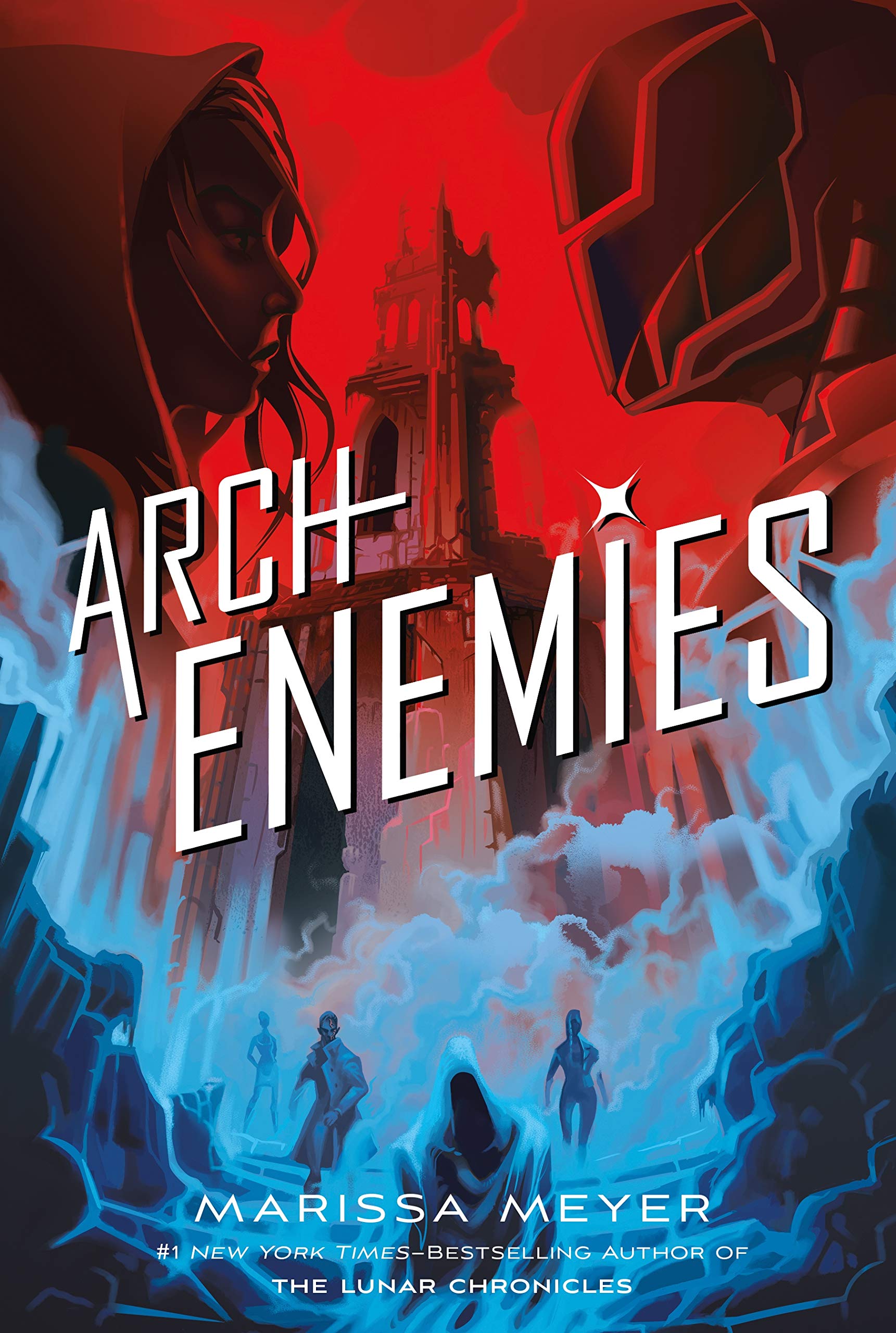 This review contains spoilers from
Renegades but not Archenemies.

Time is running out. Together, they can save the world. But are they each other’s worst nightmare?

Nova’s double life is about to get a lot more complicated:

As Insomnia, she is a full-fledged member of the Renegades, a syndicate of powerful and beloved superheroes. She works with Adrian’s patrol unit to protect the weak and maintain order in Gatlon City.

As Nightmare, she is an Anarchist—a group of villains who are determined to destroy the Renegades. Nova wants vengeance against the so-called heroes who once failed her when she needed them the most.

But as Nova, her feelings for Adrian are deepening, despite the fact that he is the son of her sworn enemies and, unbeknownst to Nova, he has some dangerous secrets of his own.

In this second installment of the Renegades trilogy, Nova, Adrian, and the rest of their crew—Ruby, Oscar, and Danna—are faced with escalating crime in Gatlon City, while covert weapons and conflicting missions have Nova and Adrian questioning not only their beliefs about justice but also the feelings they have for each other.

The line between good and evil has been blurred, but what’s clear to them both is that too much power could mean the end of their City—and the world—as they know it.

[ This synopsis was taken from Goodreads. ]

I think I said this in my Animal Crossing: Pocket Camp book tag post, but I’m really glad that Marta @ The Book Mermaid encouraged me to read this book. I attempted to read Archenemies right around the time it came out, but struggled through it. My schedule was super packed at the time, so weeks would go by without reading. Every time I picked the book up, I would’ve forgotten what I happened. It was so frustrating that I quit reading it a third of the way through. I was worried that I wouldn’t like the book because I had such a hard time getting through it the first time, but actually I really enjoyed it.

One thing I’ve really liked about this series so far is how Marissa Meyer is questioning the need for superheroes. It’s something that I’ve thought a lot about in the past. In my opinion, the world has a way of balancing itself. It’s like Newton’s third law of motion: for every action, there’s an equal and opposite reaction. Superheroes have a lot of power, and that power is balanced by creating super villains. Without super heroes, there would not be super villains. Without super villains, there would not be super heroes.

Another problem with superheroes, and Nova gets into this throughout the series, is that the citizens that they’re protecting start to become complacent. Complacency can lead to a decrease in quality of life. Without questioning and seeking to improve society, the authorities get comfortable and can often take advantage of the complacency. It was super interesting to see how Nova and I shared a lot of the same thoughts when it came to the existence of superheroes. Granted, I’m not sure I agree with the Anarchists either, but I’ll get more into that later.

More specifically to Archenemies, the romantic in me really enjoyed seeing the romance between Adrian and Nova bloom. They’re honestly very cute and slightly awkward, and it’s super endearing. I might not wholeheartedly agree as to why Nova is pursuing Adrian, but you’ll have to read the book to see why. I was super fortunate enough to be able to see Marissa Meyer on tour recently before the whole quarantine thing happened, and she talked about how the Renegades series had elements of one of her favorite shows, Sailor Moon. I didn’t watch Sailor Moon, but I understand the gist of it because my sister was a fan when she was younger. Reading Archenemies, I definitely see the similarities. There’s these two teenagers living double lives. Despite being superheroes, they still need to navigate being teens. They like each other as one persona but not the other. In the case of the Renegades series, Nova and Adrian like each other, but Nightmare and the Sentinel don’t.

There were a lot of interesting and relevant questions/ideas incorporated throughout the book. I already mentioned the whole complacency vs asking questions concept before, but there were many more. One that stood out to me was the question of who gets to decide who a person is. Who gets to define the people? It’s a big freedom of choice question. Frighteningly enough, the choice is not completely in the hands of the people. People are affected by the laws, regulations, and environment they grow up in. Not all of that can be directly controlled personally. This question really takes prominence when Agent N comes into play. I can’t go into what Agent N is because of spoilers, so you’re going to have to read the book to find out.

Another good point that the author makes in this book is neither side (Renegades vs the Anarchists) are wholly good or bad. Both have good, and both have bad. Both believe they have the people’s best interest at heart, and they are often blindsided by the deep-rooted hatred that they have for each other. This hatred and trying to define the world in black and white can be very detrimental. The fact that Nova questions everything rather than blindly follow one side or the other makes her such a complex and well-thought out character. With superhero novels, I think it’s really easy for it to become one note, where there’s a good guy and a bad guy. The bad guy is clearly pure evil, and the good guy is purely good. With Nova, her loyalties are torn. It was super fun to see her internal struggle when she starts to discover that the world isn’t as simple as she wants it to be. We love character development!

Overall, this was a super solid sequel (alliteration!) in the Renegades series! Archenemies ends at a super juicy moment, so I can’t wait to see what’s next in store for Nova and both her gangs.

I don’t know about you, but I love Nova. She’s a badass without the flex. She’s quiet about her skills, but she knows she’s good at what she does.

I like Adrian. I’m not super crazy about him, but I do like him. He has a heart of gold who just wants to do good in the world. Like Nova, he also sees the arguments of both sides rather than blindly following the Renegades, despite the fact that his parents are the leaders of the Renegades.

Ruby is the best friend everyone wants. She’s super nice and high energy, but also super down to earth.

JUST ASK HER OUT ALREADY! XD

She is the epitome of why not all superheroes are good. Power can corrupt, and it certainly went to her head.

I give Archenemies by Marissa Meyer 4 / 5 unicorn horns! I thoroughly enjoyed it, and I need the next book stat!