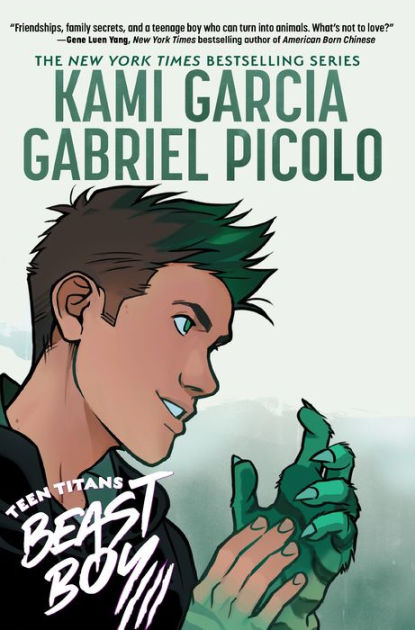 This short review is free from spoilers.

Garfield Logan has spent his entire life being overlooked. Even in a small town like Eden, Georgia, the 17-year-old with green streaks in his hair can’t find a way to stand out–and the clock is ticking. Senior year is almost over. If Gar doesn’t find a way to impress the Chosen Ones–the social elite at Bull Creek High School–he will never know what it’s like to matter. Gar’s best friends, Stella and Tank, don’t understand why he cares what other people think. They miss their funny, pizza-loving, video game-obsessed best friend.

Then Gar accepts a wild dare out of the blue. It impresses the Chosen Ones and his social status soars. But other things are changing, too. Gar grows six inches overnight. His voice drops and, suddenly, he’s stronger and faster. He’s finally getting everything he wanted, but his newfound popularity comes at a price. Gar has to work harder to impress his new friends. The dares keep getting bigger and the stakes keep getting higher.

When Gar realizes the extent of his physical changes, he has to dig deep and face the truth about himself–and the people who truly matter–before his life spirals out of control.

I’m going to start off this review letting you know that I don’t know a lot about Teen Titans. I know what they look like and what their names are, but that’s about it. That being said, I still enjoyed this story despite not having a lot of background knowledge on them.

Teen Titans: Beast Boy is the second book in a three book graphic novel series revolving around (arguably) the two most popular Teen Titans: Raven and Beast Boy. The first book (Teen Titans: Raven) follows Raven and her journey in discovering her powers while this book follows Gar (a.k.a. Beast Boy) and how he found his unique powers. While neither of them make an appearance in the other character’s book, there is a connecting character (not going to name who) who is in both. Based on the title of the last book (Teen Titans: Beast Boy Loves Raven), the two are eventually going to cross paths.

Gar’s story seems like a pretty basic high school story: an average kid goes to great lengths to get noticed by the popular kids. However, things spin out of control and the main character discovers something new about themselves that they didn’t know before. However, instead of learning that being popular isn’t everything, Gar discovers something quite peculiar about himself.

[side note: Not going to lie, when it was revealed how Gar got his powers, I was a little shocked. I kind of understand the reasoning behind it, but I wasn’t okay with the methods.]

While I don’t know a lot of Teen Titan lore, I still appreciated how the author incorporated some of the original story into a more contemporary world. His origin story is still relatively the same, but the author made the conscious decision to not give him green skin so he could fit into high school better and make getting his powers more shocking. While he has normal skin, when he shapeshifts, he turns green. In this story, Gar doesn’t naturally have green hair but purposefully dyed his hair green to make him stand out. It’s the details like these that makes the reading experience pleasant for a non-fan like me and probably very fun for fans of the comics.

All that being said, I thought the story was a little boring. It wasn’t horrible, but it wasn’t super engaging. There were a bunch of little conflicts aside from the main story that felt rushed and not fleshed out. By the end of the book, most of them solved themselves without the main character acknowledging them. Because of that, those conflicts felt unnecessary and dragged the story more than it needed to.

I’m not going to lie, I probably wouldn’t have picked up this series if it weren’t for the illustrator. I’ve been a huge fan of Gabriel Picolo’s work for a while now (throwback to the Tumblr days), and I know that he’s a big Teen Titan fan. I would’ve given this book 3 stars instead of 3.5 stars if it weren’t for his artwork. His art style is so fun to look at, and I’m super glad DC hired him to do this series.

Are you a Teen Titan fan? Who is your favorite Teen Titan?
If you could have one of the Teen Titans’ powers, which one would you choose?