THERE MAY BE SPOILERS IN THIS REVIEW!!! 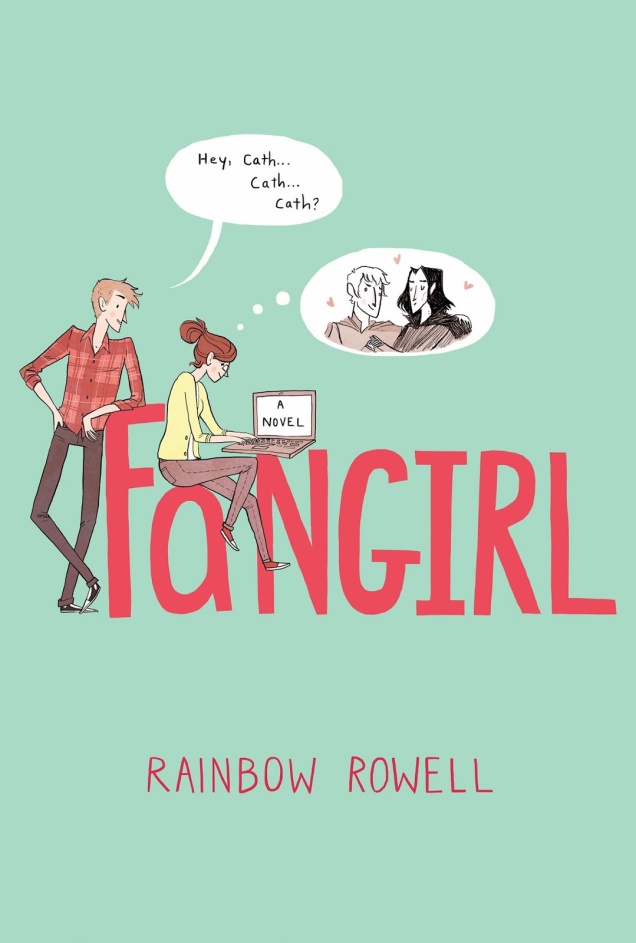 Oh my goodness I can’t explain how much I absolutely LOVE this book.

I didn’t know much about the book when I was going into it, and honestly, I didn’t need to. Everyone who has read the book told me that it was even better than Eleanor and Park, and that book was fantastic.

It took me a bit longer than normal to finish Fangirl because 1) I was listening to the audiobook 2) It was during the time when all my teachers decided to pile last minute projects on me 3) I was in a reading slump.

Nonetheless, I enjoyed the book thoroughly.

Fangirl by Rainbow Rowell is about these two twins, Cath and Wren, who did everything together as children. They were like peanut butter and jelly. Wren was the more outgoing one while Cath was the more introverted one. They both wrote fanfiction for this series called Simon Snow. When it’s time for the twins to go to college, Wren wants to go her own way while Cath wants things between them to stay the same. A string of events leads Cath to Levi, her roommate’s kinda sorta ex-ish boyfriend (it’s complicated). As they spend more time with each other, they grow closer. Wren, however, grows further apart from Cath.

Their father is struggling, and someone unexpected tries to worm their way into Cath’s life. Cath desperately tries to keep the familiy together and to finish her fanfiction. She has troubles in her creative writing class, and the relationships with those around her.

This book. THIS BOOK! THIS. BOOK. IS. SO. FREAKING. AMAZING.

It’s a coming-of-age contemporary and gosh it’s fantastic. It talks about family, relationships, being yourself, staying strong, growing up, etc. It encompasses the lesson of life, in a way.

Plus, the main character is a major fangirl.

Something about the end of the book is bitter sweet but at the same time victoriously great. I can’t put my finger on why I felt this way, but I felt as though I wanted to cry a bit in the end. Nothing bad happens. In fact, something very good happens. Maybe I was just having the feels.

When I was done with the book, the first thought that came to mind was: Where is the second book? I MUST HAVE MORE!!

I knew that Fangirl was a standalone, but my mind was like: NOOOOO I NEED MORE!! THERE HAS TO BE!!

Okay let’s talk about the characters.

Cath was your typical awkward fangirl. I felt as though I could relate to her most out of all the characters because of all the things we had in common.

Wren, well… I didn’t particularly like her because she started to push away Cath because she was too… what’s the word… uncool? Which is complete bonkers because Cath was her sister for Pete’s sake! And Cath took care of Wren even after all she did to her. Talk about ungrateful on Wren’s part!

Levi was the perfect gentleman. He loved Cath for who she was, and did things out of kindness and love instead of self-gain. I feel as though Cath and Levi are a perfect pair and I’m so happy that they are together now.

The twin’s dad was your loving single-dad with two crazy daughters. He was pretty cool.

The twin’s mom, well… I don’t know what to think of her. She left the twins when they were younger and Cath still hasn’t forgiven her for that. When they went to college, she suddenly wanted to be part of their lives.

Reagan is Cath’s roommate. She’s the tough, I-don’t-give-a-crap-about-your-problems kind of person, but she genuinely cared for Cath, so I kind of like her.

Courtney, Wren’s roommate and best friend,  was one of the major factors that broke Wren and Cath apart. She did reckless things and convinced Wren to do them with her. Not that it took much convincing or anything.