“I’ve always been of the mind that subtlety
is a waste of time. Fortune favors the flirtatious.” 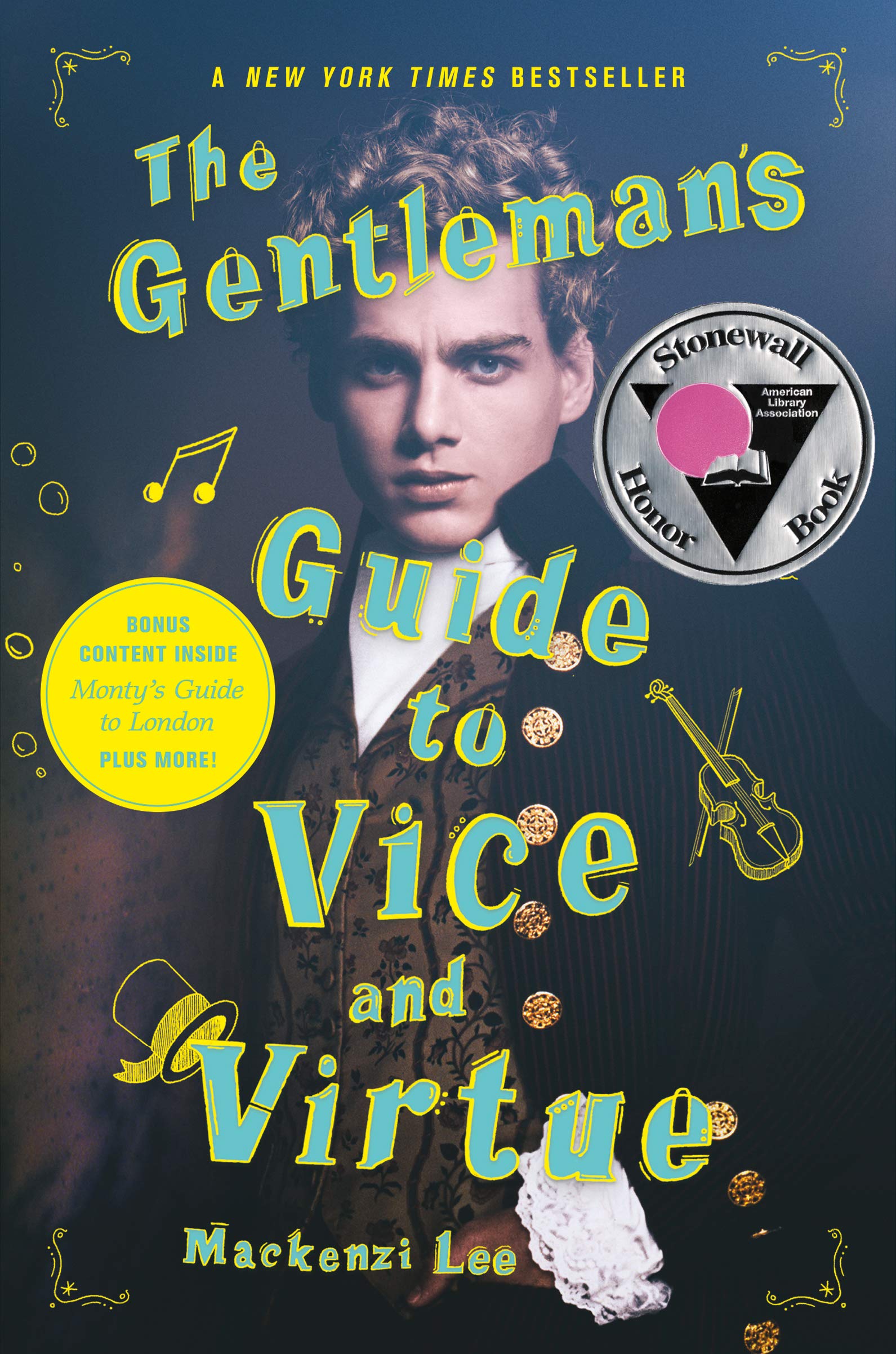 A young bisexual British lord embarks on an unforgettable Grand Tour of Europe with his best friend/secret crush. An 18th-century romantic adventure for the modern age written by This Monstrous Thing author Mackenzi Lee—Simon vs. the Homo Sapiens Agenda meets the 1700s.

Henry “Monty” Montague doesn’t care that his roguish passions are far from suitable for the gentleman he was born to be. But as Monty embarks on his grand tour of Europe, his quests for pleasure and vice are in danger of coming to an end. Not only does his father expect him to take over the family’s estate upon his return, but Monty is also nursing an impossible crush on his best friend and traveling companion, Percy.

So Monty vows to make this yearlong escapade one last hedonistic hurrah and flirt with Percy from Paris to Rome. But when one of Monty’s reckless decisions turns their trip abroad into a harrowing manhunt, it calls into question everything he knows, including his relationship with the boy he adores.

Witty, dazzling, and intriguing at every turn, The Gentleman’s Guide to Vice and Virtue is an irresistible romp that explores the undeniably fine lines between friendship and love.

I freaking loved this book. It was so fun to read, not only because of the adventure in the story but also because it’s different from the books I normally read. I’m a fantasy gal who loves to read about magic and kingdoms. This book is historical fiction with no magic, kingdoms, or fantastical animals, yet I flew through it as if it did.

I probably would have continued to put off reading TGGVV since it wasn’t a fantasy novel, but I recently (before everyone was encouraged to go into quarantine) had the opportunity to meet the author. She was such a delight to meet, and I couldn’t help but want to read her books afterwards.

So yeah. Here we are.

I think one of the reasons I loved this book is that it’s a really epic adventure story. It’s fun. It’s interesting. It’s intense. It has a little bit of everything: scandals, romance, pirates, chases, scheming, secret experiments, and a hidden, almost magical cure that seems too good to be true. What more could anyone ask for? Now that I think about it, the story’s tone reminds me that of Pirates of the Caribbean. Henry is kind of like Jack Sparrow, always finding himself in trouble and in need of a good drink.

The thing that stood out the most for me throughout the story is the character development. Rather than throw up all the information of each character in the first couple chapters, you get to know them slowly as you read the book. It felt like I was peeling layer after layer, discovering something new and more personal about each character the more you read. With Henry, for example, you first see him as a swaggering flirt who is somewhat immature, but you soon realize there is more to him than he let’s people see. For Percy, his quiet nature gives way to some of his deepest thoughts and there are some surprising reveals along the way. Now with Felicity… oh, Felicity. I freaking love her as a character. As soon as you think you know the girl she hits you straight on the head with something new. She was probably one of my favorite characters aside from Henry himself. The Montague siblings are quite the pair, those two. They are both very different and very much the same all at once. It’s a weird combination, but somehow Mackenzi Lee made it work.

Can we take a quick tangent and talk about that dang fiddle case? That fiddle case is in the top 5 indestructible fictional objects list. Screw Captain America’s shield or Thor’s hammer, Percy’s fiddle case takes the lead.

Ok, back to fangirling about how well-constructed all these characters are.

Even the “antagonists” in this story have multiple layers. There is human reason behind their supposed malice towards the trio, and you can’t help but hate and love them at the same time. Same with Henry, actually. Henry can be a little exacerbating at times, but you can’t help but empathize with him once you realize the reason behind his swaggering manner and constant drinking. He might not be the hero you’d expect, but he’s a hero in the way he knows how.

Speaking of Monty, I love that he’s bisexual. I’m not sure if it’s because I don’t read a lot of books focused on the LGBTQ+ characters (again, I read a lot more fantasy than I do contemporary), but I haven’t seen a lot of bi main characters in YA. I feel like many of the protagonists in LGBTQ+ books are either gay or lesbian. Or if a book has a LGBTQ+ character, they would be a side character rather than the main character. It was nice to see a bi character in the forefront for a change.

Now that we are at the end of the review, you might be asking, Hey. You seemed to like this book a lot. You haven’t said anything critical about it. How come you gave it 4.5 stars rather than 5 stars? The answer is that I’m trying to be a little more choosy when giving a five star rating. I feel that if I were to give all the books I read a five stars, that rating would lose its meaning. When I give a book five stars, I want it to convey that it went over and beyond my expectations in a really good way. It has to be mind-blowing. It has to rock me to the core. So, while I did REALLY enjoy this book, it wasn’t mind-blowing. Still, I absolutely loved TGGVV and will continue to read Mackenzi Lee’s works in the future.

Oh, Monty. The world would be very dull without you. If he was a zodiac sign, he’d probably be an Aries.

If Henry is chaotic, Percy is quite the opposite. He’s more calm and level-headed. He is exactly what Henry needs in a companion and partner.

She is the Hermione Granger of the trio, not because she’s the girl but because her brain is sharp and her wit is even sharper. She never takes no for an answer, despite her odds.

I give The Gentleman’s Guide to Vice and Virtue by Mackenzi Lee 4.5 / 5 unicorn horns. I recommend that everyone gives this book a shot because it’s so fun and moving.