I’ll be honest: I don’t have a lot of non-internet friends that like to read. That means I don’t have a lot of people to talk to face-to-face about books, which is the whole reason why I started this blog. That being said, I’ve been wondering what everyone’s favorite book/series is and why, because I’ve been thinking about expanding my horizons and reading something I wouldn’t normally pick up (or maybe something I would read but never knew existed). Also, I’m going down the rabbit hole and trying to expand my TBR list to combat my ongoing TBR cleanse.

So now I ask: What is your favorite book or series and why?

One of my most recent favorite series is The Illuminae Files by Amie Kaufman and Jay Kristoff. It consists of three books: Illuminae, Gemina, and Obsidio. It’s kind of like The Lunar Chronicles in the sense that each book follows a different set of characters but all their stories overlap. If I could describe the series in a few words, I would say that it is a YA sci-fi series filled with suspense, powerful businesses hell-bent on killing, an morally ambiguous artificial intelligence, and a rag-tag team of teens just trying to survive. Ok, so maybe that more than a “few words,” but it has so many layers that it’s impossible to describe it in a couple words.

If you haven’t read the series, you might be asking: what makes this series so great?

First, the GRAPHICS are SO DANG COOL. The story is told through a series of chats, security footage reports, and graphics. It adds to the whole experience because you can further immerse yourself into the story and the Illuminae world. I mean, look at that! You have to admit, it looks pretty flipping cool. 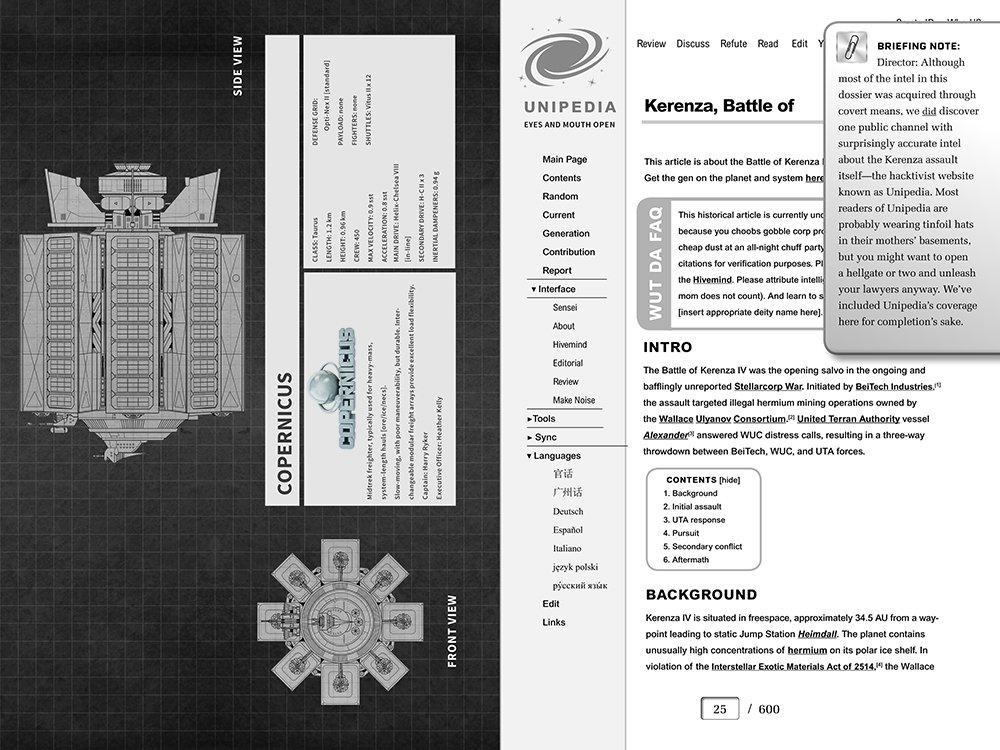 Still sketpical? I attended one of the Obsidio tour stops, and Amie and Jay talked about how this way of writing (with the chats and security camera reports) helps the reader get to know the characters on a more intimate level because they don’t expect an audience when they’re messaging their friends or running around the ship. They show their truer nature, the more vulnerable parts of themselves because they feel like they’re not being watched. Half the time when I’m walking around in buildings and stores, I forget that they’re security cameras and I just do my business as I usually do. I’m not overly cautious that someone is spying on me. Also, I don’t text like someone other than the recipient is going to read that message. The characters are the same way. Because they’re close to each other, the characters reveal their intimate relationships with the reader in a more direct manner.

This series has a little bit of everything for everyone. It’s set in space on a gigantic space ship, so if you love sci-fi novels you’ll like this. There’s romance for your romantic-at-hearts. There are these crazy, creepy alien-things that are hunting down the protagonist and an *maybe* evil AI that is slowly gaining awareness, so if you like suspense, you’ll definitely get it here. If you like humor, the some of the characters and footage reporters have sassy voices, so there are plenty of laugh-out-loud moments. It also has some pretty cool pictures and artwork for those who don’t like to read.

If that doesn’t convince you to read this series, the story itself is super exciting and fast-faced. You won’t get bored at all. In fact, you’ll probably never want to set it down until you devoured the whole series. Trust me, I stood up all night on school nights to finish these suckers. They’re that good.

Now that I’ve finished pitching/fangirling about The Illuminae Files…

What’s your favorite book/series? What makes it so special in your heart?

Feel free to be as detailed (or vague, as long as it’s spoiler-free) as you want in the comments. If you want to fangirl, I’m definitely all for it! It’ll probably make me even more excited!